Please click on the image below for further details. 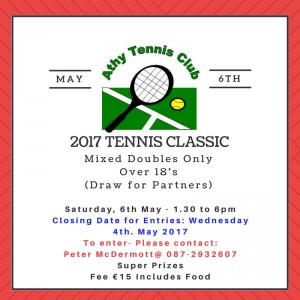 August 15th-18th – click on the image below for full details. 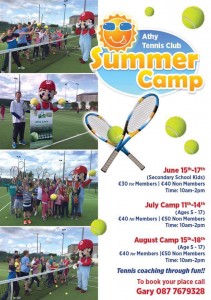 Weekly Tennis Blitz for all levels taking place every Wednesday evening at 8.00pm for the Summer months – text Brian Kelly on 086-0411351 if you wish to play. All welcome and entry fee is €3. Also tennis for new members and beginners every Monday evening at 7.30pm – all are welcome – you are welcome to come and try it out first if you are thinking of joining!

Well done and thank you to all who participated in the ATC Inter-firms Tournament which was very kindly sponsored by Athy International Concentrates.  Rathangan I (Rathangan Tennis Club) won the C Section and the team members were David Donnelly, Mariusz Sygnowski, Maura O’Loughlin and Michelle Byrne.  The runners-up were ‘Dancers’ (Athy) and team members were Peter McDermott, Keith Meredith, Maureen McCauley and Jacqueline Kelly.  ‘…UISCE’ from Carlow Tennis Club won the B section with team members Michael Hyland, Michael Brennan, Mary Lyons and Eleanor Fennell.  The runners-up in the B section were H.G. Donnelly & Sons (Athy) and team members were Karl Matuschka, Tom Lane, Deirdre O’Connor and Joan McDonald Hyland.  Well done to the organisers, Charles Chambers, Miriam Rowan and Peter McDermott on another excellent inter-firms tournament.

Many thanks to all who took part in our very successful ‘sheet quiz’ fundraiser and well done to Hazel Condell for organising it.  The draw took place on 24th June.  First prize goes to Pat Smith, 2nd Prize to Ann Hendy and 3rd Prize to Patrick Flynn.

The Summer Caretaker is on duty at the club on Monday, Tuesday, Wednesday, Thursday and Friday throughout the summer – starting this week.  Junior Tournaments take place on Tuesdays and Thursdays.  Times are 10am-1pm for under 12′s and 2pm-5pm for older age-groups (over 12′s and under 18′s).

It was with great sadness that the committee and members of Athy Tennis Club heard of the death of Peggy Delany on March 20th, 2015.  Peggy has been a long standing Committee Member at Athy Tennis Club since the earlier days of the club and had a very active involvement in the development and growth of the club over the years.  Peggy worked tirelessly and efficiently as the Club PRO for many years,  always ensuring excellent publicity for the club.  Peggy also had a great involvement in junior tennis at the club and she served as Club President in 1997.  The Delany family generously sponsored the annual Delany Cup Day at the club for 25 years.  Peggy put a huge amount  of work into the organisation of this event every year and it continues to be the biggest and most popular tennis event of the club calendar.  Peggy was dedicated and committed to our club and her passing leaves a great void, she is greatly missed by us all.

Peggy was pre-deceased by her husband Tommy and her daughter Florence.  We extend our sincere sympathy to her daughter, Annemaria, her sons-in-law, Gerry and Frank, and her grandchildren, Emma, David, Katie and Robert.

May Peggy Rest In Peace.

The Annual Tennis Classic took place on March 7th and was a very successful competition with 30 players participating. Many thanks to Taaffe Solicitors (Athy) for their generous sponsorship. The winning team included Michelle Byrne, Ronnie Shorten, Dermot Kelly and Roger Munnis. The runners-up were Joan McDonald Hyland, Olga Braithwaite, Peter McDermott and Leo Tinkler. The prize for the highest scoring lady went to Maura O’Loughlin of Rathangan Tennis Club and Richie Ryan and Laurence Doyle were the highest scoring men.

The 2015 Spring League will start on 23rd March. The closing date for entries is 18th March. The League will be run over 5/6 weeks and will involve tennis on one evening per week (Monday-Thursday). The format will be men’s doubles and ladies doubles. If you wish to enter please text Brian on 086-0411351 and let us know if there is one evening in the week (Mon-Thurs) which does not suit you to play.